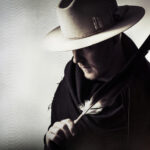 Sirius B belongs to the generation that grew up with trance. The electronic music style that was formed in the early 90s and is characterized by harmonic chords, melodies and long atmospheric sound carpets. Rhythm oriented and danceable, played in a higher tempo range. Over the years Michail (as he is called by his civil name) has found himself in progressive house and techno. What has remained is his preference for danceable, melodic and atmospheric sounds – which can be found in all his sets today. Sirius B has moved many people with his music over the years. This happened at various parties in the Schneiderei (ZH), in Stall 6 (ZH), the Bananenreiferei (ZH), in KUGL (SG) and in Hollästei (GL). With the wish to put the music and the community in the foreground, he founded together with his longtime friend and namesake Michel also known as Purple Drain, in autumn 2019 the label Nullmeridian.